It’s no secret that marijuana is commonly used by athletes, however in the wake of numerous scandals that have rocked the NFL this year involving the abuse of prescription pain killers the truth about marijuana use amongst the players has finally been made public. Former Vikings punter Chris Kluwe told the Guardian. “I’d say, conservatively, that 50 to 60% of players use cannabis,” And he’s not the only one talking, Redskins free safety Ryan Clark told ESPN’s First Take stated that at least half of NFL players were using Cannabis as an alternative treatment to highly addictive painkillers such as Oxycontin “Guys look at this as a more natural way to heal themselves,” . For those who still remember a time when the jocks and the stoners sat at opposite ends of the table, that time has obviously coming to an end when the supposed biggest meatheads in the US are commonly lighting up after practice to relax their muscles. 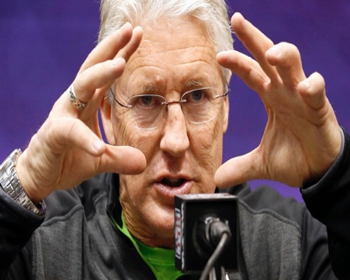 So, why is the upcoming game also about cannabis? Well, believe it or not but the two teams going in have two very different opinions about using marijuana medically. Pete Carroll ( Seahawks Coach ) has stated that the NFL should relax their draconian approach to marijuana use and that “Regardless of what other stigmas might be involved, we have to do this because the world of medicine is doing this.” . Compare this with what the Patriots coach Bill Belichick who has more of an old school conservative approach to football. Carroll stresses the importance of meditation, and yoga amongst his players and earns their respect, while Belichick is more of a cariacature of someone who wants to go out and kick some ass. Regardless, I think I found the team to root for this weekend! Go Seahawks!