Marijuana has been used as a sacrament for millenia, and has been mentioned in texts as early as 5000 b.c (In China where the seeds were used as food, and the fiber to make clothing) . The emperor Pen Ts’ao Ching wrote about its psychotropic properties around 2700 BC. So basically, people have been using it for quite a while.  The Persian prophet Zoroaster (628 bc – 551 bc ) is another man who  mentioned the use of the plant in conjunction with religious ceremony.  He listed marijuana as the number one usable plant out of 10,000 which he wrote about in his sacred text the Zend-Avesta. For Zoroastrians (many which believe made up the og biblical Magi) smoking cannabis was synonymous with the highest priest classes.  Prior to this, marijuana was used by Hindus and is mentioned in the  Atharva veda, and referred to as “sacred grass”. In India it was commonly referred to as Bhang and was used as a sacrament to Shiva. This was around 800 – 1200 BC.

Scythian tribes in what we would now call Kazakhstan commonly left the seeds of cannabis in tombs of their royalty as offerings around 500 bc, and brought seeds to Europe, where it flourished and was used both medicinally as well as in the production of textiles. We know this because of an urn containing the seeds which was unearthed in Berlin.  Around 100 AD there is a stash box buried in a tomb in what we would now call Siberia.  Around 500 AD Jewish Talmud mentions the use of cannabis in connection with their psychedelic properties.  Around 1000 AD the use had become widespread, and therefore perhaps the first time the plant was linked to “mania” was also around this period when Hasan ibn al-Sabbah, the Old Man of the Mountain, would get young men to use a lot of weed and then force them to commit assasinations. This is contained in the legends written about the assasins at the time. The word hasish ( hashisin) morphs into assassin.

Around 1300 AD Marco Polo sees its use widespread throughout the Middle East. Hashish becomes a major trade item between the Middle East and China. By 1400 the Ottomon Empire prohibits it, and sees it in connection with the lower classes. By 1500 slaves brought to Brazil bring the seeds with them, and begin growing it in South America.  By 1600 French and British settlers in Virginia begin planting hemp en masse in what becomes the USA. By 1620 there is a law which requires every farmer to grow hemp.  1776 the Decleration of Independence is written on paper made from Hemp. George Washington says to “plant it everywhere”.  By 1800 it becomes illegal in India although there is a booming trade in it. By 1850 cannabis extract is available in American pharmacies, and in Paris it is quite commonly used and clubs are established like bars where patrons would consume it.  In 1900 Queen Victoria is prescribed it in conjunction with cramps from her period. It is deemed by the regulatory bodies in the UK as being completely safe to use.

Then in 1910 the Mexican Revolution occured and the US was flooded with immigrants from Mexico who were also recreational users of cannabis. Xenophobia surrounding the new Americans leads to the passage. And crimes committed were linked to marijuana use. This lead to the plant being prohibited in the US. By 1930 it would be illegal in the UK. And in the US, after the Great Depression the plant was blamed for the wave of crime which, ironically, came during the prohibition of alcohol. The drug was then tied to black americans and jazz musicians.  By 1936 “reefer madness” becomes an unintentionally funny look at cannabis use.  By 1937 it would be linked to interracial sex, communism, and violence and Henry Anslinger single handedly makes it illegal.

This idiotic puritanism ultimately sees its fall as beatniks, hippies, and counter cultural forces stand up to the stupidity in the 1960s. However little is changed regarding the law because now new anti-government forces can be arrested for marijuana charges.

And the rest isn’t exactly ancient history. Efforts are still made to end marijuana prohibition througout the world, and we’re winning the war on drugs! 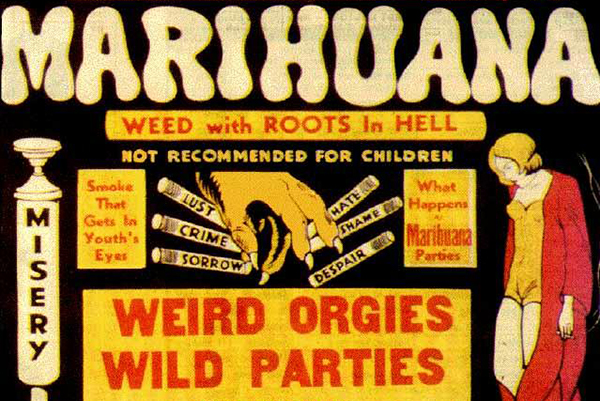