There’s been an urban legend floating around that Monsanto has created the first GMO marijuana plant. Monsanto has consistently denied the rumor, yet it still has resurfaced time and time again. But it does bring up an interesting question as it pertains to intellectual property rights and cannabis, as well as goes to the heart of what it means for something to be genetically modified as opposed to a plant which is selectively bred throughout generations. Basically the main difference between selective breeding and Gentically modifying a plant comes down to the speed with which the DNA of a plan can be altered. The classic example to look at is corn, which started off as a wild grass, and was selectively bred throughout thousands of year to become the corn we know today. Bananas and wheat looked absolutely nothing like the way they do today, and this is because farmers over thousands of years picked their favorites, and bred them for the traits which they wanted to maximize. Sound familiar? Yes, those giant THC glands forms huge crystals on your buds? They are the result of the work of literally thousands of years of farmers intentionally trying to maximize this part of the plant. In recent years this has sped up, and our strains now contain more CBDs and less THC, or whatever cocktail a user is looking for.  So in a way, the weed we smoke actually has been genetically modified. But they did it the way we’re accustomed to, by selectively breeding the plant. 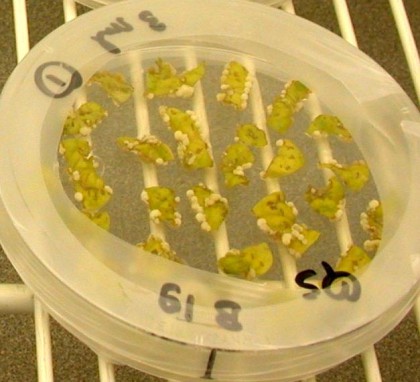 As far as I’m aware there are no examples of a transgenetic modification of cannabis. Trans means “different” and this refers to the way scientists now work within the ag business to create new plants that are immune to pesticides, or cows that make human milk, or pigs that glow in the dark.  And the “trans” part of genetic modification is what frightens a lot of people. This refers to taking the DNA from a completely different species and forcing it into the DNA of a plant to make it change. This is actually done with special instruments that jam their way into the DNA. So a protein from a jellyfish may be forced into the skin of a pig which makes it glow. It can make plants create “natural” pesticides to protect them from pests. But to some, while studies have shown that GMOs are safe, this still makes people feel uneasy about what they’re ingesting. Regardless, it’s only a matter of time before we see genetically modified marijuana. The problem I often have with GMOs is that companies like Monsanto use them to protect their intellectual property, and I don’t like the idea of patenting nature in some regards. But make no mistake, as legalization continues to progress there will be lawsuits regarding the intellectual property of certain marijuana strains. After all, many of the specialty strains we all know and love took literally generations to perfect, and the creators of them will not want to see Monsanto or some other company swooping in and stealing all of their hard work just because they have the money to get a patent. Another fun fact regarding patents is that the US government actually holds the patent for THC. No Joke!

Why munchies after weed

Is Smoking Resin Bad For You?