It’s a classic stoner conundrum that has been brought up numerous times throughout the years. What is the biggest bong in the world ever recorded?   For me, my friends and I got a 12 feet length of PVC pipe since my smoke buddy’s dad was an electrician. He had tons of the stuff lying around the garage. So we created a base, and sealed it with some silicone (If you want to see a tutorial how to make a similar giant bong check this site where they take you step by step through the creation of an 8 foot bong) . 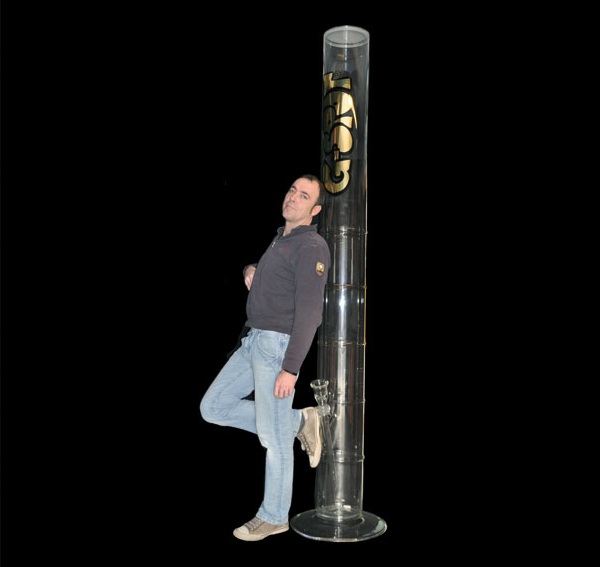 Obviously, the bong was super top heavy so we needed to find a way to get it to stand up. FIrst we thought of the stairs as an option (cue the obligatory “Stairway to Heaven” reference) but the angle wasn’t quite right. Then, in a flash of brilliance my friend Lala gazed out the window and saw the ground covered with snow. We knew exactly what we needed in order to secure the base of what we thought was the “Biggest bong in the world”! We created a giant snowman, and coming out from the area where the snowman’s dick would be was the bowl! It was a thing of pure beauty. We had to get up on an 8 foot ladder to smoke out of it. It was nearly impossible to draw off of, so we’d have to take turns, one would suck, and then the next would scamper up the ladder and take a hit. Mind you, this was all in a residential neighborhood! Amazing we never got busted.

So with this nostalgic story in mind (unfortunately no photos as this was years ago) I set out to find the biggest bongs ever recorded. I started, and quickly noticed a trend, people were constantly upping the stakes. There is really a bong war going on much like the Sears Tower and the Burj Khalif. So let’s continue on down the path of some of the world’s largest bongs.

Here we have an adaptation of the classic stairway giant bong. This 12 foot beast packs a mighty punch, and I can’t imagine the lung capacity it would take to clear it.

But there’s always a chance to up the ante in the biggest bong wars! This 15 footer seems like it would be barely functional, which begs the question as to whether there needs to be some ground rules as it pertains what actually constitutes a functioning bong. When searching for the biggest bongs in the world, one must remember that often times if someone makes a 30 foot bong, then of course someone else will try to one up them.

We have to hop to the other side of the ocean for this massive bong which doesn’t even fit in the house! An unbelievable 20 footer peeks out the window into the back(front? :/ ) yard of this home!

At this point, I think we can see that there simply isn’t much suction to even get the bowl blazing. But who cares!? It’s a 20 foot bong!  Of course it’s ridiculous, but that’s half the fun of building these behemoths! They’re a kind of modern day folk art sculpture. Sure, in this day and age, with everyone eating edibles, and sucking on vapor bags the art of the ridiculously huge bong is losing favor, however I’ll always still harken back to my younger days, and the giant 12 foot snowman bong, and remember that I had some of the most fun ever smoking out of old Frosty.

Are bongs healthier than pipes?