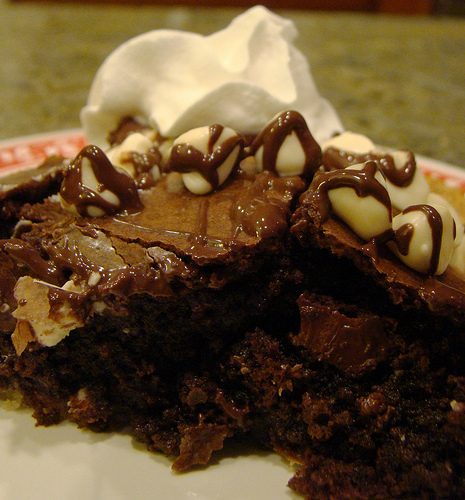 Pot brownies are one of the best ways to consume marijuana. They taste great and also are easy on the lungs. As you see I’ve collected various pot brownie videos above and I’ve also outlined a few good recipies for pot brownies. We’re going to start by making our pot butter. This is the staple ingredient and it’s important to think of the butter as the most important step to making any food with marijuana.

1. First grab two different pots of different sizes. Fill the larger one with water. Now, you’re going to put the small pot inside the larger one. This prevents overcooking and burning your butter (more importantly if you burn your weed, you lose all your thc, so it’s super important to cook it at a low temperature).
2. Wait till the butter melts, and add as much pot as you desire. There is no exact formula to figuring out how much marijuana you need to add, but I can offer the following analogy. For a basic batch you can basically add twice the amount you’d smoke in a bong bowl in proportion to about how many pot brownies you will eat. Say it normally takes you one bong bowl to get totally stoned. Therefore if you eat one brownie you’re going to need at least twice that amount in the one brownie.

For this recipe I’ll be using the example of one ounce ( 28 grams) because it’s easy to scale. Look at the ingredients on the package to scale how much you will need to make.

(Proportions example: 1 ounce of pot to 6-7 sticks of butter)
3. Let the mixture of butter and weed simmer for a half hour, KEEP STIRRING IT ALL THE TIME!
4. Turn off the heat and allow it to cool for a few minutes.
5. Strain out the plant matter from the butter using a seive.
6. Wait another 20 minutes (until the mixture reaches room temperature) and then put it in the fridge.
7. Add this butter mixture in the same amount which the brownie recipe calls for.

Why and How this recipe works to get the THC from the marijuana into the butter.

Basically what we are trying to do is get the cannabinoids (THC, CBD, etc.) from the plant matter. We do this in a oil/fat/butter-based solution, since the cannabinoids won’t cling to water based molecules. The result is a suspension of all the good things inside what is casually referred to as`CANNABUTTER’.

There is another method of making the butter which I will describe below.

First bring a pot of water to a rolling boil, then put a small amount of butter in the water. The butter will quickly disolve into all the water.

Then put in your grass with the water and boil it. Here’s the magical part. The good stuff we want from marijuana (ie. thc) will actually cling to the little butter molecules which are bopping around in the boiling water. The THC will be attatched to the butter molecules, while the water will turn green and get rid of all the unpleasant stuff (the spinach like taste of the plant matter) Anyway, while this mixture is boiling it is important to continually stir it. Stir for about half an hour (your kitchen will smell of weed for probably the rest of the day). Then strain the entire mixture through a tight screen and put the whole mixture into the fridge. What happens in the fridge is part 2 of the magic. Since oil and water don’t mix, the butter will rise to the surface and solidifies as it cools. Butter requires a much lower temperature to turn to a solid so the water will obviously still be water.

After a few hours you’ll see a gucky mixture rise to the top. Scoop out all of the butter on top, seal it in a plastic or glass container and throw out all the water.

This way does take longer but there are a few reasons marijuana connoisseurs prefer this method :

1. You seperate the THC< and good stuff from the yucky vegetable taste of the leaves. 2. You can make super strong cannabutter because the amount you sautee at one time pales in comparison to the amount you can boil. 3. There is absolutely no danger of burning up your valuable THC (that's why we stir when we sautee it, we don't want to burn off all our thc) because the water will keep the THC from burning. These cannabutter (we like to call it cannabudder 😉 ) recipes can be modified in an endless amount of foods. From simple garlic toast, to pizza crust, to brownies, chocolate chip cookies, or birthday cakes. Whereever you need butter (or sometimes substitute it for the amount of oil you need) you can use this recipe. Other things to consider. This stuff smells like mad. If you're parents are away for the weekend or live next door to a nosy neighbor it is not a good idea to make this recipe. I can't stress enough how much this smells when you cook it. I love the way it smells of course 🙂 but others may not share my love for these smells 🙂 It's generally better to make one powerful brownie rather than a bunch of less powerful brownies. This is because of the way our body digests food. A high concentrate brownie with the same amount of weed in it as three brownies will actually get you more stoned. Why this is? I don't know, but it's true. So basically just make a super strong batch and eat less. A super easy ratio of pot to butter would be a quarter ounce of weed per stick of butter. This may seem like a lot but the results would be defninite to completely floor you. It is important to remember that unlike smoking (where one can easily regulate the amount ingested) it is not so with brownies. So, if you eat like half a pan of strong brownies you're not going to be in for a very good time. Your head may be buzzing. Take it slow. Eat one brownie, wait a half hour (yes it takes that long for the effects of the eat marijuana to kick in) and then assess how you feel. It is important not to overdue it when eating weed as it is very easy to get waaaaaay too stoned which will most defintely make you completely couch locked. You don't want to end up like the cop who made his brownies too strong, freaked out, and then called 911 (video below) .

WASSSSSSUP VEGANS!!!!!!!! <3 For all of you vegans out there you can simply substitute the butter with oil DONT USE MARGARINE!!!! This is super important. The way margarine is chemically made does not make it able to cling to the THC molecules we want. If you make any of these cannabudder recipes with margarine the results won't have any effect. No joke. Don't do it. So. anyway. For all of the vegan stoners out there, I imagine you guys are already samarais in the kitchen, so think about how the above recipes work and how the good marijuana molecules we want cling to the butter, and substitute that logic and apply it to oil . You already make brownies all the time with vegetable oil instead of butter, so now you've just got to make the oil mixture and infuse the good cannabis molecules. This can be done using the same two methods described above to make super yummy vegan marijuana munchies. Check out Dr Dianes recipe on how to make vegan marijuana cooking oil. The possibilities for this completely vegan marijuana vegetable oil recipe are endless. Oh yeah. Vegan weed cheesecake. Now that's something I don't think anyone could pass up 😉 In the video below she is making an absolutely ridiculous amount of super high concentrate oil. For your recipes you will substitute how much oil the recipe calls for, with your weed oil, and then scale the dosage accordingly as outlined above. Rule of thumb is that you need twice as much to eat as compared to smoking.